Brandon faced addiction head on from a young age. He went to ten different rehabilitation programs throughout his life. Born and raised in Fayetteville, Arkansas, he lived in a loving home. He started smoking marijuana at the age of 16. At 20 years old, Brandon’s dad gave him the option of either joining the military or moving to Alaska; Brandon chose to move to Alaska where he lived for two years. At this point in his life, Brandon was still highly addicted to marijuana. He moved back to Fayetteville where he then got married and had a daughter. Not long after that, Brandon broke his back in 2002, which launched his overwhelming addiction to opioids.

Brandon was getting pain medications from five different doctors at one point, not only taking, but selling the prescriptions. He slowly lost all the support of his family. After his mother passed away, Brandon had nowhere to go. He ended up homeless and living in the woods behind The Salvation Army in Fayetteville.

“Nobody would talk to me when I was homeless. I was still getting pills while sleeping in a tent. The only thing I ever did was go get pills and live in a tent,” said Brandon.

Brandon owed over $19,000 in fines in Fayetteville and Rogers and owed another $500 to Siloam Springs to get his driver’s license back. Brandon described it as being so overwhelming because he had so many things hanging over him, it just felt like he couldn’t stand back up.

The Salvation Army was Brandon’s tenth and final rehabilitation program. Pastor Nick Arrouqi told Brandon that he believed in him. He cried and prayed over him. Brandon claimed this to be a huge motivation in his road to recovery. He didn’t want to let Pastor Nick down.

For weeks Brandon prayed every single night. He begged God to remove the obsession from his life and then he would try to stay sober. He would pray this same prayer two hours every night for three weeks. After this prayer, Brandon moved to a different prayer; “God, if You remove this obsession, with Your help, I’ll stay sober.” Finally, Brandon realized what he had to do. He prayed the prayer of, “God, I promise You I will stay sober if You remove this addiction.” He strived to keep this promise to God.

Brandon started reading his bible and working hard on building up his character. He didn’t want to fail anybody, especially God. Each week he worked harder on a different character flaw.

“I would catch myself lying over silly things and have to tell the person, ‘sorry, I just lied about that,’ and I would add up the number of times I caught myself lying and try to improve on it each day,” said Brandon.

Brandon described the cross of sobriety as one of the most important and helpful things for him in the program. This cross represents God, A.A., character, and hope. Each week, you would work on an item under each category. For example, to add to your character, one week you might do a nice thing for another programmer every day of that week. For A.A., you might write down a few things that are holding you back. For hope, you might put something you pray to happen. And for God, you might pray for your brothers every night. This would continue for 12 weeks until you’ve done 12 things in each category. 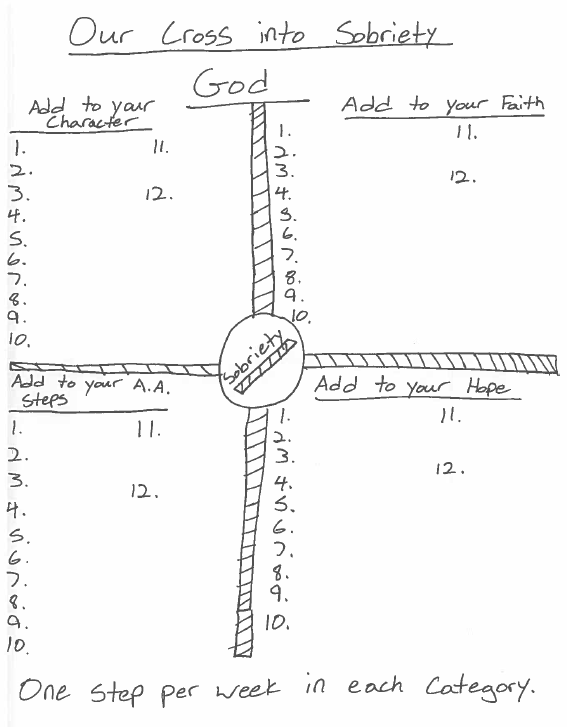 Immediately after graduating from the rehabilitation program, Brandon started teaching a class at The Salvation Army on Monday nights, looking to help others in need just as he was in need. He now has mended his relationship with his sister, brother-in-law, and three nephews and is hoping to work on his relationships with other friends and family members. Now The Salvation Army's full-time shelter and drug and alcohol rehabilitation program director in Fayetteville, Brandon comes into work every day with a smile on his face and the passion to save lives.

Brandon said that coming to The Salvation Army and working there is what keeps him sober. He feels that this is the only setting where he has ever truly felt in place.

“Anybody that is currently addicted to opioids should go get help,” said Brandon. “You’re welcome to come talk to me. No matter how far down you’ve gone there is a way out.”

If you or somebody you know has an addiction and is seeking help in Northwest Arkansas, call The Salvation Army of NWA at (479) 521-2151 or read about our rehabilitation program here.