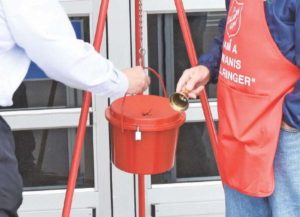 NEWNAN, GA (December 9, 2016) – The ting-a-ling of a Salvation Army bell ringing is one of the unmistakable signs of Christmas.

You can be a part of this Christmas tradition between now and Christmas Eve in Coweta.

The Salvation Army has permission to post bell ringers at a number of local stores, but many of the shifts go unmanned because of a shortage of bell ringers, according to Heather Creech, director of the Newnan Salvation Army Service Center.

Shifts are available at all three Kroger stores, Walmart, Hobby Lobby, Sam's Club, Belk and JCPenney. Walgreens could also be a Salvation Army collection site, but there haven't been enough volunteers to man that location, Creech said. A new location this year is Golden Corral, but it is well-staffed with volunteers.

Solo bell ringers should be at least 18, though teens 16 and 17 may ring in pairs. There can be up to two bell ringers at a time at a given location, Creech said.

Ideally, shifts of bell ringers are on site from 9 a.m. to 9 p.m. Monday through Saturday, but many locations aren't fully manned.

To volunteer, you can just show up at the Newnan Service Center at 670 Jefferson Street, pick up your apron, kettle and bell, and head out for a two-hour shift. The center is open from 8:30 a.m. to 5 p.m. Or you can set up your volunteer shift by calling 770-251-8181 or emailing SAbellringers@yahoo.com.

Creech said some of her best volunteers are church groups that will man an entire day's shift at one location. Local businesses can also get together and volunteer.

Volunteers are welcome – and encouraged – to bring their pets or small children and to sing, dance, or play an instrument.

"Bring the kids and let them ring with you," Creech said, who said donations are always better when there are children, pets, or people performing. "The more of that happening, the better the kettle."

Donations are also down this year, not only in Coweta but around the country. Creech said they are about two days' worth of donations behind.

"We started early so we should be ahead, but we're not," she said.

The three local Kroger stores and Walmart are the best locations for donations, Creech said, so manning them is the priority. The Kroger at Thomas Crossroads is the highest grossing Kroger in the whole Southeast for the Kettle Drive, Creech said.

One side of Walmart is always fully staffed by the White Oak Golden K Kiwanis Club. Terry Schroeder coordinates the club's ringing and fills in any needed shifts.

Schroeder said he enjoys being a bell ringer.

"I think the Salvation Army does a terrific job," Schroeder said. "And I like people. I enjoy talking to people even if they don't give. I always say ‘Have a nice evening' or "Merry Christmas.'"

The kettle drive is the Salvation Army's only major fundraiser, and proceeds fund local services through the year.

Article from The Newnan Times-Herald