We Are Dedicated to Doing The Most Good

Early on in its history, The Salvation Army was set up with a quasi-military structure patterned after the ranks of the British Armed Forces. This structure has contributed to a reputation for discipline and mobility that serves the organization well. The Salvation Army is actually made up of several sub-groups, equally important and instrumental in accomplishing the mission of spreading the gospel and serving humanity.

OFFICERS: Commissioned from one of four Colleges for Officer's Training in the United States, officers are full-time personnel with responsibility for leadership of both the spiritual and social services work of The Salvation Army. Their ranks descend from General (the international leader stationed at International Headquarters in London) down to lieutenant (the rank assigned upon commissioning). Learn more about The Salvation Army officers by clicking here.

SOLDIERS: Soldiers are members who maintain their congregational church home at The Salvation Army and have signed a statement of beliefs, pledging to live up to a high code of moral conduct. They usually are employed outside of The Salvation Army in all manner of vocations and careers.

ADVISORY BOARD MEMBERS: Advisory Board members supply the backbone of public support that sustains The Salvation Army in the community. Normally comprised of influential business leaders and public officials, this board of volunteers advises The Salvation Army on matters of community priorities and needs. They also serve as ambassadors among the influential, enlisting financial support for the cause. Advisory Councils serve as special program arms of the Advisory Board and are in place for The Salvation Army Boys & Girls Club, the Pickens County Service Center, and the Oconee County Service Center.

What is The Salvation Army?

The Salvation Army is a worldwide evangelical Christian church with its own distinctive governance and practice. The Salvation Army's doctrine follows the mainstream of Christian belief, and its articles of faith emphasize God's saving purposes. The Movement, founded in London, England, in 1865 by William and Catherine Booth, has spread to many parts of the world. The rapid deployment of the first Salvationists was aided by the adoption of a quasi-military command structure in 1878 when the title "The Salvation Army" was brought into use. A similarly practical organization today enables resources to be equally flexible.

Evangelistic and social enterprises are maintained, under the authority of the General, by full-time officers and employees, as well as soldiers who give service in their free time. Leadership in The Salvation Army is provided by commissioned and ordained officers who are recognized as fully accredited ministers of religion. Salvationists accept a disciplined and compassionate life of high moral standards which includes abstinence from alcohol and tobacco.

From its earliest days, The Salvation Army has accorded women equal opportunities, every rank and service being open to them, and from childhood, the young are encouraged to love and serve God. Raised to evangelize, The Salvation Army spontaneously embarked on schemes for the social betterment of the poor. Such concerns developed, wherever The Salvation Army operates, in practical, skilled, and cost-effective ways. Evolving social services meet endemic needs and specific crises worldwide. Highly trained staff are employed in up-to-date facilities.

The need for modernization and longer-term development is under continual review. Increasingly, The Salvation Army's policy and its indigenous membership allow it to cooperate with international relief agencies and governments alike. The Salvation Army's partnership with both private and public philanthropy will continue to bring comfort to the needy, and the proclamation of God's redemptive love revealed in Jesus Christ offers individuals and communities the opportunity to know spiritual fulfillment here on earth and a place in Christ's eternal Kingdom.

What Do We Do?

We have one agenda: to meet
human need without discrimination. 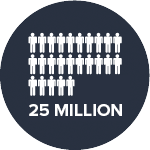 We serve in 130 countries around the globe.

We have over 1.5 million members
consisting of officers, soldiers, and adherents.

We’ve been pursuing our mission since 1865.