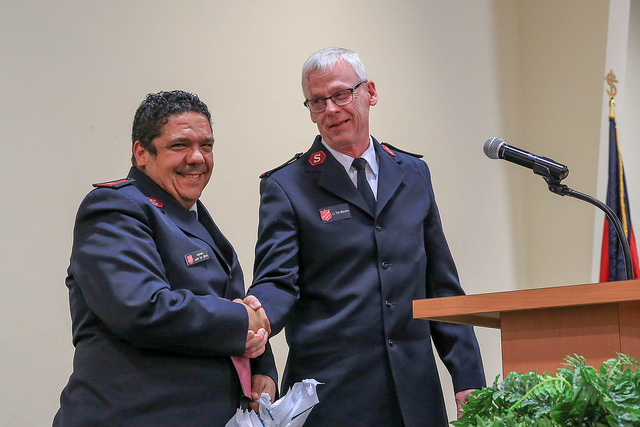 April 10, 2017 (GRIFFIN, GA) – The Griffin, Georgia Salvation Army hosted its annual Volunteer Appreciation Dinner at the Kiwanis Center of Griffin, recognizing the many groups and individuals that contributed to their success in 2016.

"I cannot tell you how pleased my husband and I are with the volunteer base that we have," said Lt. Paula Blevins, corps officer for the local Salvation Army to the dinner guests. "Just look around the room. We are thankful for everyone of you."

A significant part of the evening was dedicated to the presentation of awards and certificates to groups and organizations that donated their time, money, or simply provided a location for The Salvation Army to raise funds.

Awards for the location that brought in the most during the Red Kettle Fund Drive went to the Sock Shoppe. Awards were also given to the top-three elementary schools in The Salvation Army's annual canned food drive. The Volunteer of the Year award was collectively presented to Sun City residents for their participation in volunteering opportunities year-round. Lt. Tim Blevins said amoung their many involvements with The Salvation Army, Sun City residents regularly help our at the Family Store and rang the bell five days a week during the Christmas season.

The guest speaker for the evening was Captain Julio da Silva, Director of Field Training at the Evangeline Booth College in Atlanta. DaSilva, a native of Brazil, joined The Salvation Army in 1987 and has served in his home country, South Africa, England, and the U.S Southern Territory.

"Who I am today, first I owe to the Lord, the One who saved me and gave me life," he said, then referring to the hospitality when he first came to Griffin and the United States in 2004. "So many of you who are here tonight helped me out when I came in 2003. I owe you all for welcoming me to this county and this beautiful neighborhood. I'm a Brazilian by birth and a Southerner by the grace of God."

Da Siva briefly touched on his own roots and shared how he is a product of The Salvation Army. "They gave me hopes and dreams, he said. "They changed my life forever."