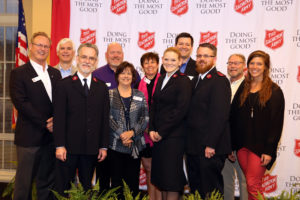 March 21, 2017 (ROME, GA) -The Salvation Army is celebrating 130 years of service in Rome this year as well as the organization's mission of hope, which is spread through its volunteers and workers.

During a dinner and awards ceremony at Berry College's Krannert Center Monday evening, workers, volunteers and donors gathered together to honor the volunteers, bell ringers and community partners that help the Salvation Army do its work.

"This is just a fraction of those who help us every day," said Mark Kozera, advisory board chairman. "It's been many years since we tried to gather everyone together and our mission tonight is threefold. We want to express gratitude to our supporters and volunteers, we want to educate the community about our vast array of services and we want to inspire people by demonstrating what kinds of results we see."

The group honored the Bell Ringer of the Year for the greatest number of hours served during the Christmas 2016 Kettle campaign, which was Berry College's athletic department. The Rome-Floyd County Fire Department received the Bell Ringer's award for most money raised, with more than $11,000 raised in four days.

Volunteer Kala Bartley told the crowd her time with the Salvation Army has helped her grow spiritually and inspired her to go to college and get a degree in arts education so she can return to the Army to participate in the children's arts program the Army sponsors.

David Lively, who works at The Salvation Army as the kitchen manager, spoke about how his time at the Army helped him learn a few things about love.

"I remember Captain Doug McClure (former head of the Rome Salvation Army) told me one day that he loved me," Lively said. "I didn't know what to say to that, because when I grew up, you knew you were loved, but no one said it out."

Lively said after McClure told him that, he attended a Bible study at the Salvation Army and was told about how good Christians loved everyone.

"I'd always wondered about that," he said. "Why are you expected to love your neighbor, even if they are awful, or love your enemies? Then I was told that God created each of us with hope. That made it make sense. We are all God's creatures."

Lively said the next time he saw McClure, he told him he loved him.

"I say it now to everyone," he said, smiling. "I'm not bashful anymore about it. I love everyone in this room. If not for the Salvation Army and Capt. McClure, I might never have realized that."

"It has been my honor to serve in the Salvation Army for 42 years," he said. "The Army serves people and invests in their lives. I travel across the 15 southern states I serve and I get to hear young people tell me how they've turned their lives around with help from The Salvation Army."

Mockabee said the biggest challenge and commitment the Salvation Army has now is to stop the "revolving door of poverty."

"We want to see that intergenerational poverty stop," he said. "We want families be able to sustain themselves, to stop the cycle."

Mockabee explained that Gen. William Booth, the founder of The Salvation Army, launched a war, and that is why he needed an army.

"He wanted to start a war against the sin and misery in the human condition and against poverty," he said. "He said once that he would fight this war until the very end."